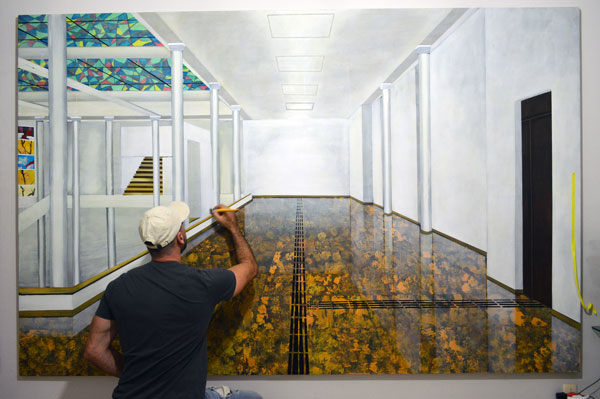 On March 22, Armando Alvares Penteado Foundation’s Brazilian Art Museum (local acronym MAB-FAAP) will be opening “From our collection: 1961-2021”, with a Paulo Almeida installation consisting of three large paintings. To schedule your visit to see this exhibition, which will be ending on August 29th, 2021, please go to https://visitante.agendamento.faap.br/.

Almeida develops conceptual artworks, so his paintings relate to exhibition spaces and dialogue with them by showing artworks chosen from a collection or previous exhibition held by cultural institutions that have hosted them.

His three paintings to be shown here were made to reflect our museum's mezzanine, where the exhibition is being mounted. Having painted this space, Almeida selected several artworks from MAB-FAAP’s collection to be painted or copied. He describes the effect obtained as if “they were being shown online there.”

The exhibition is the first held for a project we have named Open Mezzanine (Mezanino Aberto) to honor artists who are part of our institution as professors or students, with at least 10 years experience of the artistic scene. Almeida was the first chosen from all those enrolled. “The idea is to hold an annual exhibition based on a selection from the projects submitted,” adds Fernanda Celidonio, the museum’s director.

Paulo Almeida's productions are predominantly paintings that relate to other languages ​​such as photography, video and performance art. After taking a Fine Arts degree at FAAP, he has shown work in several countries and won awards such as the 15th Cultura Inglesa Festival 2011.
He has also taken part in artistic residency programs, including one in New Delhi, India (in 2013) through the Artistic Residencies Abroad Program run by Brazil’s Foreign Affairs Ministry in partnership with FAAP. Paulo Almeida lives and works in São Paulo.