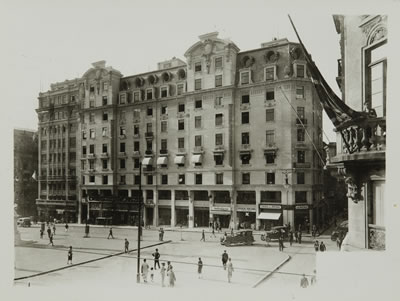 The Lutetia Building, owned by FAAP, was designed by Ramos de Azevedo and built in the 1920s. A striking example of the architecture that prevailed in downtown São Paulo in the first half of the 20th century, the building is a historical symbol. In 1992 it was registered by the Municipal Council of Preservation - CONPRESP (Municipal Council for Preservation of Historical, Cultural and Environmental Heritage of the City of São Paulo). Located in Praça do Patriarca, in the center of São Paulo, 100 meters from the headquarters of the City Hall, the building, which is part of a set of three independent buildings with a single facade, has 8 floors, in addition to the ground floor and basement, in a land of 256m². Since its construction, it has housed offices and commercial establishments, and has maintained its external architectural features. With the objective of restoring and modernizing its facilities, faculty and students of the Faculty of Fine Arts of FAAP - Architecture course - began and concluded, in the year 2000, the restoration of the facade, the entrance hall of the building and the renovation of the areas for use as a cultural center. In 2003, work began on restoring staircases and traffic halls, as well as retrofit, providing the modern infrastructure with new electrical, hydraulic and air-conditioning systems, as well as logical cabling networks and telephony, preserving the original characteristics of the building. As part of the celebrations for the 450 years of São Paulo, the Lutetia Building was inaugurated, fully restored, on January 25, 2004. On the occasion, MAB-FAAP programmed three exhibitions that occupied three floors of the building. The first floor received the exhibition "Ramos de Azevedo and the City of São Paulo", focusing on the participation of Ramos de Azevedo, architect who designed the Lutetia Building. On the second floor, the exhibition "Sculptures - MAB-FAAP Collection" was held, which featured works signed by artists such as Weissmann, Vlavianos, Bruno Giorgi and Leon Ferrari. The third floor was filled with the exhibition "São Paulo: Múltiplas Perspectivas", exhibiting works by students and professors of the Visual Arts course of FAAP. The 4th and 5th floors featured lofts designed by Sig Bergamin, aimed at attracting the attention of the public to the feasibility of establishing homes of good standard in the Center, thus aligning with the initiatives of the City of São Paulo / EMURB and NGOs as the "Viva o Centro ", in addition to MASP, which converge efforts to revitalize the urban core of São Paulo.